I listen to a lot of audiobooks while I sew. But very few have captured me like the Hunger games did. I literally just couldn’t stop listening to them until I had finished the whole series. So being up in the middle of the night listening to audiobooks what else is there to do but draw new patterns.

So I drew up these 3 patterns that are based on the covers of the 3 books. I know there are already versions of these up on FIS and those are amazing. But I really wanted to make something more detailed. For one I feel the circle around them stands for so much.

Like forThe Hunger Games I feel it stands for the fence around the districts and the cage that the Hunger games arena is.

For Catching Fire like the first it stands for the cage. But it also stands for the target that Catniss is now that she defied the Capitol. (Intentionally or not) 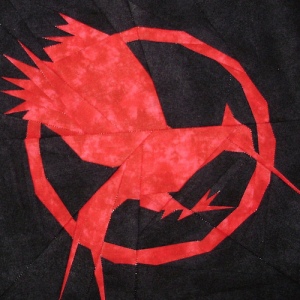 Then in Mockingjay the ring is broken, shattered around the Mockingjay. Standing for braking free of the Capitol and the shattering of old ways. And perhaps having your world shattered and broken as well.

These are all 10″ and are in the improved Patterns pages that are now sorted by categories. The Hunger Games are in the sci-fi and fantasy section

I really don’t doubt that there will be a lot more Hunger Games patterns coming in 2012.
Also if you haven’t already you really should pick up a copy of The Hunger Games and start reading. It really is the best thing since Harry Potter 😀

may the odds be ever in your favor
Liljabs

This entry was posted in Hunger Games, Pattern. Bookmark the permalink.

1 Response to The Hunger Games